Please NOTE: the Autism Parents Association of Trinidad & Tobago (APATT) is officially no longer an operating NGO as of 1st July, 2021. The old contact number: 489-1673 is no longer serviced and will eventually be recycled to the public. Therefore, it may be in your interest to please delete that contact number from your phone. The web and social media pages will be updated soon to CONTINUE with FREE relevant information to assist Autism Parents.

Autism's Colour is NOT Blue

New (2019): We now have APATT's News updated exclusively at APATT News - TTAutism.org. You can keep using TTAutism.com for the Forum and other information.

Below is an archive of APATT News. Please use APATT News 2019+ for the latest News from the Association. APATT Members can also utilize the APATT's Initiatives Board which allows discussion / comments on these reports.

APATT meets Her Excellency Paula-Mae Weekes, President of the Republic of Trinidad & Tobago.

In an extraordinary, one on one meeting, Her Excellency and Maria Borde (APATT President) discussed the plight of Autism parents and their children.

APATT meets Disability Director at the Ministry of Social Development

APATT had a meeting with Disability Director, Ms. Rogers to discuss the issues Autism Parents face with regards to access to public grants to assist their children.

APATT had a meeting with Mr. Garcia to address the urgent educational needs of children with Autism in T&T.

APATT President, Maria Borde was invited by the office of the PM (gender and Child affairs) to have a meeting headed by Jacqueline Johnson, Permanent Secretary in the Office of the PM, Mr. Bertrand Moses, Coordinator of Child Development, along with other members of staff. The purpose of the meeting was to discussed the serious plight of Autism parents with regards to free public education & therapy.

Article published in the Newsday Newspaper.

Autism:  11 years of inaction over Autism. Let that sink in.

The Trinidad Guardian featured an article about Autism in T&T and APATT's position.

On Autism Awareness Day, APATT launched a second video animation called "Lucy wants to go to school" highlighting the urgent educational needs of children on the Autism spectrum in T&T :

APATT produced a video animation to highlight the plight of Autism Parents and their children in T&T (the vignette has been featured on CCN TV6) : 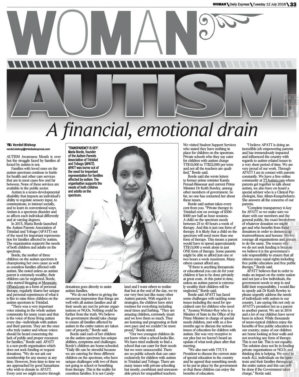 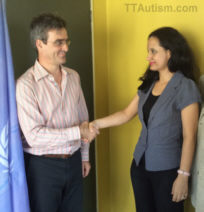 Holy Name Convent students put on a presentation about autism. 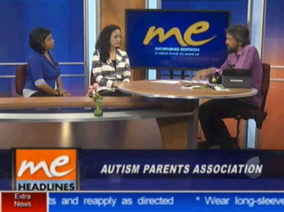 Get Pied For Autism Challenge

Reaching a different segment of the public via an unusual method in order to spread a message through specific questions and answers. 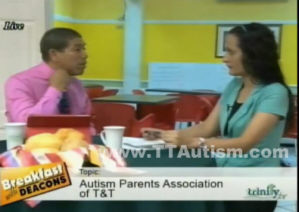 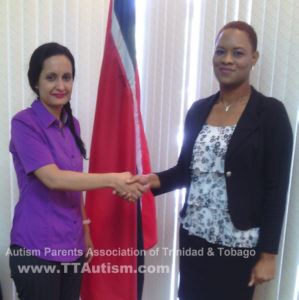 Hon. Minister of State in the Office of the Prime Minister with a portfolio that includes special needs children. Read More

The Autism Parents Association of Trinidad &Tobago (APATT) President Maria Borde (left) met with the President of the Trinidad and Tobago Unified Teachers Association (TTUTA) President Mr. Davanand Sinanan (right) to discuss APATT's mission with regards to the serious issue of the lack of proper educational facilities with qualified teachers for children with Autism in our country and the fact that it is the government's solely responsibility to provide the aforementioned.

"It’s a mixture of NGOs, CBOs, religious organisations and the State and you have all kinds of substandard, sub quality education being imparted to these children in these 'special schools.' No one can be held accountable when things go wrong because you are not quite sure who is the owner of the school, who is the administrator of the school, who is responsible for the school. A lot of nonsense takes place in many of these schools and it is high time that the State accepts that it has a responsibility to provide quality education to those students just as well and not depend on the NGOs and CBOs." Source 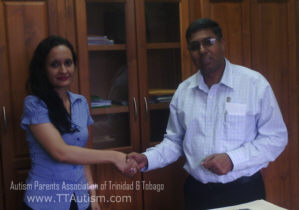 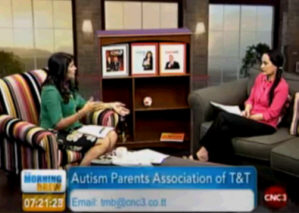 Martina Chow (left) President of the Music Therapy Association of Trinidad & Tobago generously donated $2,000TT to APATT. We are indeed very grateful and we will ensure the funds go directly in helping some of our families who are in desperately need of services for their children. 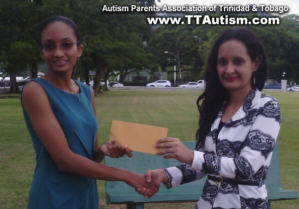 APATT Booth at the 9 Months and Beyond Family Expo in Maraval. 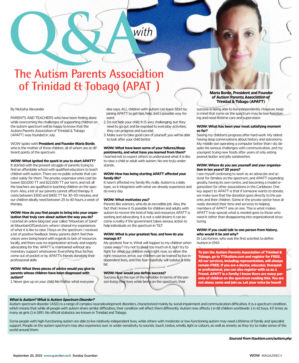 The Autism Parents Association of Trinidad and Tobago (APATT) was incorporated under the Companies Act, 1995.